Showing posts from October, 2009
Show all

This morning while surfing the Internet, I learned that subway ads are coming out next Monday in New York City declaring “You Can Be Good Without God.” This won’t be the first time this sort of thing has happened in the Big Apple. Earlier this year, a group of atheists sponsored bus posters that read, “You Don’t Have To Believe In God To Be A Moral And Ethical Person.” Similar signs have also appeared on buses in Chicago, Toronto, and London. Immediately I thought of Psalm 14:1 and Psalm 53:1 which both affirm, “ There is none who does good.” Ecclesiastes 7:20 reads, “ For there is not a just man on earth who does good and does not sin.” How should Christians respond to atheists? While unbelievers need to hear the truth of God’s word, we must remind ourselves that it’s the goodness of God that leads one to repentance (Romans 2:4). Sinners need to hear about a God who wants to do good things in their lives. As David said in Psalm 52:1, “The goodness of God endures continua
Post a Comment
Read more

This past weekend, I traveled with my friend John Loewen to Tarboro, North Carolina for the Fresh Outpouring Conference at Word of Life International Church . John was leading prayer sessions during the conference and suggested I come along to assist in an evangelism outreach . On Saturday afternoon John and I rode in a car with a woman named Louise who's an associate minister at Word of Life. We first stopped at a downtown intersection where I got out of the car to talk to three teenaged boys with skateboards. Two of them already knew the Lord. The other boy thought he was going to heaven for "being good." Emory prayed to receive salvation. Moments later we drove up to a older woman named Lois who wasn't sure of her eternal destiny. Her daughter said they attended a church and tried to discourage me from talking to Lois. Fortunately I persisted and Lois prayed to get born again. Ironically this incident happened on “Church Street.” Louise had planne
Post a Comment
Read more

God’s Word Does Not Return Void 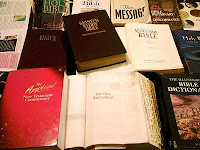 Occasionally when fulfilling the Great Commission, you will encounter individuals who claim the Bible has contradictions. I often respond to this objection by pulling out a Bible and asking, “Will you show me one?” Many times these folks cannot think of any. Others will point out something in the Scriptures that they consider a contradiction. I had once such incident tonight while taking out the trash. Three boys were coming up the sidewalk and seeing this as a witnessing opportunity, I put down the bag of garbage and handed out tracts. The boys continued walking away as I attempted to minister to them more. It appeared they were focused on going somewhere. Not long afterwards, a man watching me asked what I had just said to his son (this is why in some situations it’s best to avoid witnessing to young children unless you receive their parent’s permission first). I replied that I was a minister sharing the gospel. Then I proceeded to ask this man where he would spend etern
Post a Comment
Read more
More posts