Showing posts from April, 2021
Show all

Not Moved By What You See

I didn’t closely follow the Derek Chauvin trial but was a bit surprised with the outcome. The former Minneapolis police officer was convicted on all three counts for the death of George Floyd. I didn’t agree with Chauvin pressing his knee on Floyd’s neck for several minutes. However, fentanyl could have killed Floyd (similar to what happened to Prince five years ago). He had three times the lethal dosage in his system. The jurors may have rendered the guilty verdict fearing reprisals from protesters.  Throughout history, innocent people have been imprisoned for crimes they didn’t commit. They were sometimes the victims of circumstantial evidence. One online dictionary defines that as “evidence not drawn from direct observation of a fact in issue.” An example could be someone running away from a murder scene with a weapon in hand. Unless witnesses saw him commit the murder, there’s a possibility the suspect wasn’t involved. Hours before the Derek Chauvin verdict was delivered, I had a
Post a Comment
Read more 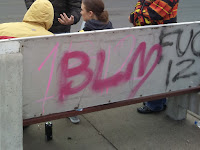 Almost a year ago, the death of George Floyd in Minneapolis sparked riots there and in other cities. Then last Sunday, the police shooting of Daunte Wright in the adjoining suburb of Brooklyn Center resulted in more unrest. These and other incidents have spurred greater attention to the Black Lives Matter movement. Their mission “is to eradicate white supremacy and build local power to intervene in violence inflicted on Black communities by the state and vigilantes.”  Certainly, I’m against racism. However, there are reasons why I will not support BLM… Black Lives Matter dishonors authority. I’ve seen protesters make ugly remarks and gestures toward the police. Those crying “justice for Daunte Wright” need to be reminded he was being arrested for an outstanding warrant. While it’s tragic Daunte was accidentally shot and killed, that wouldn’t have happened if he hadn’t committed another crime: fleeing the police. Romans 13:4 says, “For he is God’s minister to you for good. But if you
Post a Comment
Read more 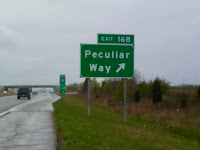 Sometimes when God leads us to do something, the outcome doesn’t go as planned. This weekend, my friend Gretchen and I attempted a road trip from Minnesota to Texas. We both prayed before leaving and perceived this was God’s will. The original plan was for us to stay a few days with an intercessor who lives outside Dallas.  While checking my text messages in Missouri, I found out the intercessor doesn’t allow dogs in her home. Gretchen had brought along her chihuahua. Nevertheless, we continued our trip since Gretchen has a daughter in Austin she could stay with. Hours later, Gretchen received an emergency phone call from her parents. It became necessary for us to turn around and return to Minnesota.   This wasn’t a wasted trip from an eternal perspective. Gospel tracts were handed out along the way. One recipient was a McDonald’s employee in Kansas City who had to bring our order out in the rain. She still prayed with me to receive salvation. Jesus said in Luke 15:10,  “…there is joy
Post a Comment
Read more

My Appointments with Dr. Demento 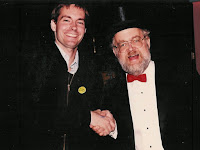 This past Friday, a well-known radio announcer turned 80 years old. I emailed him a birthday greeting that day but then felt inspired to write this tribute since he helped get my music heard by a wider audience. Barret “Barry” Hansen was born on April 2, 1941, in Minneapolis, Minnesota. After graduating from Reed College in Portland, Oregon, Barry moved to California and earned a master's degree at UCLA plus worked a variety of jobs in the music industry. Eventually, he created a radio show featuring novelty songs and other unusual recordings. A colleague who called Barry “demented” for playing stuff like that inspired a new nickname. The Dr. Demento Show was soon heard throughout the United States and abroad on Armed Forces Radio. It’s probably best known for launching the career of parodist “Weird Al” Yankovic. The first time I heard of Dr. Demento was in 1982. I became an announcer for KMSC, the radio station at Moorhead State University in Moorhead, Minnesota. During my shif
Post a Comment
Read more
More posts