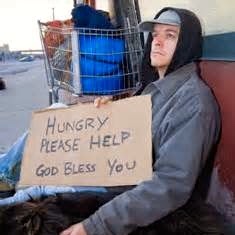 In recent years, I’ve gone out of my way to offer food plus gospel tracts to beggars. Last Tuesday night during an evangelism outreach in St. Paul, I got to minister to at least three such people.

As the church van I was riding in got off Interstate 94 at the Snelling Avenue exit, I noticed a woman holding a sign asking for help because she was supposedly raising her grandchildren. After the van was parked a few blocks away, I walked back to the offramp this woman had been standing by. I brought with me a bottle of water I planned on giving her. Instead, a man was standing there (but without a sign) and so I offered him a tract. Seconds later, that woman drove by in a nice-looking vehicle with two adult passengers. It appeared she was part of a team of professional panhandlers. The car stopped at the corner long enough for me to hand the woman a tract.

Then I walked back across the bridge to minister to two other panhandlers in the area. The first one already knew the Lord and told me he used to own a limousine service until his wife divorced him and "took him to the cleaners." In response, I shared testimonies of God providing for me on the mission field without having to beg. Psalm 37:25 says, “I have not seen the righteous forsaken, nor his descendants begging bread.”

Next, I spent several minutes ministering to a younger beggar who had been turned off to the things of God because of his parents becoming Jehovah’s Witnesses. He wouldn’t pray with me but listened to what I had to say. He was stunned when I offered him the bottle of water. I told him it was from the Lord who is a rewarder of those who diligently seek Him (Hebrews 11:6).

Sometimes God has directed me not to approach certain panhandlers. It’s unfortunate many of them here in America are con artists. Nevertheless, changed lives can result when we make ourselves available to be a blessing to those in need...materially and spiritually.


“for I was hungry and you gave Me food; I was thirsty and you gave Me drink...inasmuch as you did it to one of the least of these My brethren, you did it to Me.” - Matthew 25:35, 40
beg church donations finances give God Holy Spirit Jesus live by faith ministry missions money offering panhandling poverty prosperity