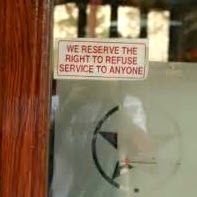 One sign we’re living in the last days is society’s increasing acceptance of homosexuality. At the time of this writing, 36 American states have legalized same-sex marriage. In response to Florida being the most recent, a Tampa Tribune writer claimed it “should represent no threat to anyone’s personal faith.” Baloney!

In many other places, Christian business owners who stood up against the homosexual agenda have been severely persecuted. One Colorado baker named Jack Phillips was threatened with jail time for refusing to make a wedding cake for a gay couple. Instead of going to a different bakery, the two men filed a lawsuit. A judge ruled Phillips was guilty of “discrimination” and ordered him to make wedding cakes for other same-sex couples who visit his store. He has since stopped making wedding cakes altogether.

One homosexual wrote to me claiming Jesus never discriminated against anyone. Therefore, Christians shouldn’t do that as well. A closer study of Scripture would reveal otherwise. Although the Lord doesn’t want anyone to perish, He will resist certain individuals such as the proud (James 4:6, 1 Peter 5:5). Likewise, Christians are to distance themselves from certain types of people. Among them are those who contentiously promote false teachings...

“Now I urge you, brethren, note those who cause divisions and offenses, contrary to the doctrine which you learned, and avoid them.” - Romans 16:17

“Reject a divisive man after the first and second admonition, knowing that such a person is warped and sinning, being self-condemned.” - Titus 3:10-11

“If anyone comes to your meeting and does not teach the truth about Christ, don’t invite that person into your home or give any kind of encouragement. Anyone who encourages such people becomes a partner in their evil work.” - 2 John 1:10-11 (NLT)

We are also to avoid fellowship with professing believers living in willful sin. 1 Corinthians 5:11 says, “But now I have written to you not to keep company with anyone named a brother, who is sexually immoral, or covetous, or an idolater, or a reviler, or a drunkard, or an extortioner—not even to eat with such a person.”

Now it’s different if you are ministering to sinners. Jesus reached out to thieves and prostitutes not to affirm their behaviors but to give them opportunities to repent and be transformed. Likewise, Christians can cultivate friendships with unbelievers in hopes that they will come to know the Lord someday. However, we are not to feel guilty when boundaries must be set with those who repeatedly reject the truth of God’s word.

It’s not always hate to discriminate.

“Do not be unequally yoked together with unbelievers. For what fellowship has righteousness with lawlessness? And what communion has light with darkness?” - 2 Corinthians 6:14
agenda Bible church discrimination gay GLBT God homosexual Jesus LGBT marriage politics pride proud same sex tolerance