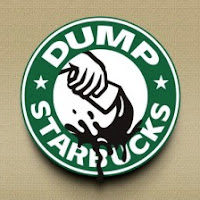 I’ve always thought Starbucks Coffee was overrated. Usually, I go to Caribou Coffee. One reason I prefer Caribou is they provide free refills of their “coffee of the day” while you remain in the store. Nevertheless, I occasionally enjoyed Starbucks’ cold drinks such as their frappuccinos. That changed in March 2013 after reading about Starbucks CEO Howard Schultz affirming his support for same-sex marriage. I decided then to avoid Starbucks products altogether.

Not long afterward, I went evangelizing one night in downtown Minneapolis with three other soul-winners from a local church. The leader of our group directed us into Starbucks and offered to buy us each a drink. I didn’t have peace in my heart and declined his offer. When I later told him the reason, my fellow evangelist totally understood for he wouldn’t do business with Home Depot because of their supporting homosexual groups and pride celebrations (which they have since discontinued).

To be fair to Howard Schultz, it’s still being mistakenly reported Christian shareholders were told he didn’t want their business if they won’t “embrace diversity.” During a stockholders meeting in Seattle, Mr. Schultz actually told them, “If you feel, respectfully, that you can get a higher return than the 38% you got last year, it’s a free country...You can sell your shares in Starbucks and buy shares in another company.”

Sometimes it’s not practical to boycott a business that provides a necessary product or service. While I have friends who continue to patronize Starbucks, I prefer to avoid spending my discretionary income at places that endorse gay marriage (which is neither “gay” nor “marriage” in God’s eyes). However, I will walk into a Starbucks Coffee shop if the Lord leads me to minister to someone there.

Always remember, we are in the world (but not of it) to reach the lost with the gospel.

“They are not of the world, just as I am not of the world.” - John 17:16
agenda Bible boycott business Caribou church coffee evangelism finances gay gospel homosexual Jesus money Starbucks steward