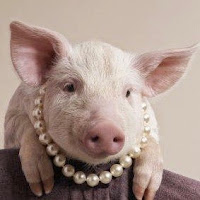 While I’m evangelizing, the Lord will often direct me to avoid certain individuals. Some Christians think this contradicts Jesus’ command to “Go into all the world and preach the gospel to every creature.” (Mark 16:15) Salvation is available to those who want it. Sadly, not everyone values the things of God.

One day while doing street ministry in Richmond, Virginia, I walked up to what appeared to be a Black Muslim. I perceived the Lord didn't want me talking to this man but witnessed to him anyway. He wasted my time rambling about what he thought the Bible says. I walked away since he wouldn’t let me respond to his misguided claims.

Then last month, I found out comedian Kip Addota had died. I posted a link to an article about that on Dr. Demento’s Facebook page since Kip’s recordings are often played on Dr. D’s radio show. My post included the comment, “I hope Kip knew the Lord.” That immediately triggered some mocking messages. I felt led to delete my post. Then I remembered what Jesus said in Matthew 7:6, “Do not give what is holy to the dogs; nor cast your pearls before swine, lest they trample them under their feet, and turn and tear you in pieces.”

A footnote in the Amplified Bible’s rendering of Matthew 7:6 points out “dogs” and “pigs” represent those who despise sacred things. Jesus also said in Matthew 15:26, “It is not good to take the children’s bread and throw it to the little dogs.” There have been other times when I tried describing spiritual things to people who didn’t appreciate them. They either weren’t saved or immature in the faith.

Amos 5:13 says, “Therefore the prudent keep silent at that time, for it is an evil time.” While our labor in the Lord is not in vain (1 Corinthians 15:58), there are times it’s best not to say anything to people who will bring nothing but persecution. It’s more fruitful reaching out to those who recognize the value of what’s being offered to them.

“Again, the kingdom of heaven is like a merchant seeking beautiful pearls, who, when he had found one pearl of great price, went and sold all that he had and bought it.” - Matthew 13:45-46
Bible eternal life faith God Holy Spirit Jesus pearls persecution precious silent swine value