Step Out and Prophesy 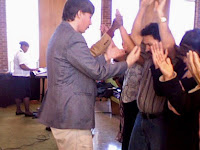 Earlier this year at a home meeting, I kept having thoughts that God has a mate for a young woman there. I didn’t step out until hearing someone say she’s been dealing with loneliness. So I approached her and asked, “Have you been believing God for a mate?” This woman seemed reluctant to reply. Then another woman sitting nearby said the Lord also told her that and should have said something. God confirms His word in the mouths of two or three witnesses (2 Corinthians 13:1). Not wanting to intimidate the lonely woman, I gently told her, “God has a mate for you if that’s a desire of your heart.”

Sometimes when evangelizing, I perceive certain individuals are called to full-time ministry. Rather than declaring to them “thus saith the Lord”, I ask if anyone has told them they are called to preach. Usually, these individuals reply, “Yes.” Then I point out this is a confirmation. In rare instances, some say no one has told them that. In response, I encourage them to pray about it. God may be calling them but they haven’t yet received the revelation.

Perhaps some Christians are afraid to give a word from the Lord because of being labeled a “false prophet” if they are wrong. A false prophet is someone who lacks character and doesn’t submit themselves to the lordship of Jesus Christ. It’s true the Mosiac Law commanded the stoning of false prophets. Under the New Covenant, we should extend grace to brethren who are practicing to prophesy but occasionally miss it.

Over the years, a few prophecies given to me were off target. One of which happened at a conference in Indiana. During an altar call, an evangelist told me I would work with two ministers I knew and then asked (as if he sought my approval), “Isn’t that good?” The prophecy didn’t bear witness with my spirit. One of the ministers he mentioned had started teaching things that were inaccurate and unscriptural. The other minister later unfriended me on Facebook and now drops f-bombs on his Twitter page.

Another time in Florida, a Bible school student prophesied that God was calling me to attend his particular school. I politely replied, “God has told me I don’t have to go to Bible school.”

One shouldn’t be flippant about giving “words from the Lord.” We don’t want to misdirect another believer’s life. Ultimately, the one receiving the word is responsible for it. We shouldn’t despise prophecies (1 Thessalonians 5:20) but be discerning enough to reject those that aren’t divinely inspired.

When you perceive God is giving you a word of knowledge for someone, don’t be afraid to share it. That’s how we learn to flow in the gifts of the Spirit.

“Pursue love, and earnestly desire the spiritual gifts, especially that you may prophesy.”