Where Is That In The Bible? 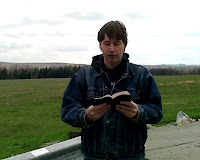 Occasionally, I receive critical messages from people who don’t agree with things I show in my videos. A remark I often hear is, “Where’s that in the Bible?” Certainly I agree the Word of God is our standard in which everything we do and say must be judged.

But has it occurred to you that some generally accepted Christian traditions aren't specifically mentioned in Scripture? For example, Sunday Schools cannot be found in the Bible yet most churches have them. The same thing could be said about altar calls for salvation. God uses people in different ways because we are all unique.

Jesus Himself did unusual things like spitting and putting mud in people's eyes to bring healing. No doubt things like that done today in our congregations would offend many church folk. John 21 says that Jesus did many other things that were not written down. Those "other things" could have been more radical than what was recorded in the Scriptures. Of course, we must reject all ideas that go against God's word (2 Corinthians 10:5).

I'm not endorsing doing foolish things for the sake of being foolish. What God considers "decently and in order" may be different than what some people's opinions of that is. 1 Corinthians 2:14 says, "But the natural man does not receive the things of the Spirit of God, for they are foolishness to him; nor can he know them, because they are spiritually discerned." If we are really following the leading the Holy Spirit, then He will occasionally lead us to do things that doesn't make sense in the natural but will result in people getting saved, healed, and delivered. So instead of being critical of people who may do things that go outside our religious boxes, we must examine the fruit.