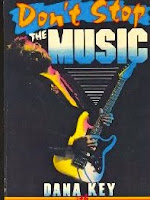 Last night I was surprised to learn of the death of Dana Key, one half of DeGarmo & Key. This group was among the pioneers of Christian rock music. (It’s also interesting to note Key was a direct descendant of Francis Scott Key, the author of "The Star Spangled Banner.”)

While I didn’t listen to DeGarmo & Key’s music a whole lot, Dana wrote a book that impacted my life as a young Christian. “Don’t Stop the Music” was a response to the anti-"Christian Rock" position of some well-known preachers. As a fellow musician, I will testify that God can use any kind of music that glories Him.

I met Dana once in 1994. At the time I resided in a room above the New Union, a Christian nightclub in Minneapolis that later evolved into Club 3 Degrees. If I recall correctly, Dana did a solo performance that night at the New Union. I didn’t attend the concert due to a prior commitment but returned to the New Union in time to meet Dana and have him sign my copy of “Don’t Stop the Music.” Four years later, I gave the book to a disc jockey friend in Germany who was later inspired to start a Christian disco there.

Following semi-retirement from DeGarmo & Key, Dana headed a Christian record company and recently had been serving as the pastor of a small church in Tennessee. Dana was only 56 years old when he died last Sunday from a ruptured blood clot. Let’s keep his wife and three children in our prayers during this time of transistion.

“For I am persuaded that neither death nor life, nor angels nor principalities nor powers, nor things present nor things to come, nor height nor depth, nor any other created thing, shall be able to separate us from the love of God which is in Christ Jesus our Lord.” – Romans 8:38-39