Your Way or Yahweh 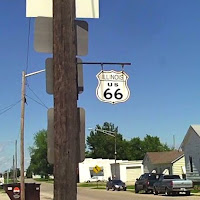 Before the Interstate Highway System was constructed, a popular road Americans traveled on was Route 66. At one time, this legendary highway stretched from Chicago to Los Angeles. Nowadays, you will find historical markers where this highway once existed including the town of Atlanta, Illinois from where I’m writing this article.
There is another well-known highway once numbered 666 located near the “four corners” section of the southwestern United States. Route 666 was often referred to as “Devil's Highway” because of the number associated with the antichrist. Partially because people kept stealing road signs numbered 666, that highway has since been renumbered 491.
Spiritually speaking, there are many people traveling down Route 666. Jesus said in John 14:6, “I am the way, the truth, and the life. No one comes to the Father except through Me.” Yet multitudes believe that they will be okay for eternity traveling down paths of their own making.
Last night, I stopped at a gas station in Atlanta to buy a cappuccino and witnessed to the gray-haired man behind the counter. This man had no concern at all about his eternal destiny because of confidence in the good things done in his lifetime. It reminded me of an old song written by Paul Anka that was popularized by Frank Sinatra and was also a hit for Elvis Presley…
And now the end is near/And so I face the final curtain
My friend I'll say it clear/I'll state my case of which I'm certain
I've lived a life that's full/I traveled each and every highway
And more, much more than this, I did it my way
(Proverbs 14:12 says, “There is a way that seems right to a man, but its end is the way of death.”)
Regrets I've had a few/But then again too few to mention
I did what I had to do/And saw it through without exemption
I planned each charted course/Each careful step along the byway
And more, much more than this I did it my way
(Proverbs 16:9 says, “A man’s heart plans his way, but the LORD directs his steps.”)
For what is a man what has he got/If not himself then he has not
To say the things he truly feels/And not the words of one who kneels
The record shows/I took the blows
And did it my way
(Proverbs 4:19 says, "The way of the wicked is like darkness; they do not know what makes them stumble.")
Burger King still uses the advertising slogan, “Have It Your Way.” While God wants to give us the desires of our hearts (Psalm 37:4), we must always be ready to make sudden changes in our lives as the Lord leads. God has a bird’s eye view from heaven observing the paths everyone travels in life. By fully yielding your life to Him, your steps can be redirected to avoid traps and accidents the devil tries to set up in your way.
It pays to listen to Yahweh!
"Teach me Your way, O LORD, and lead me in a smooth path, because of my enemies." - Psalm 27:11
my way Have it Your Burger King Frank Sinatra Elvis God Jesus Holy Spirit path highway road Route 66 666