I Still Believe - A Review 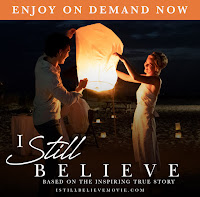 With the coronavirus lockdown in effect, many of us remained at home this past Easter weekend. The night before Resurrection Sunday, a friend I was staying with recommended seeing a new movie he had downloaded. I watched it the next morning.

“I Still Believe” is about Christian rock musician Jeremy Camp. The movie begins with Jeremy leaving his hometown in Indiana to attend college in California. There he meets a woman named Melissa. Not long after the two get engaged, Melissa discovered she has cancer. Jeremy temporarily moved in with her parents to care for his fiancé who he later married. Melissa has successful surgery but the cancer came back. During another hospital stay, it appeared she was supernaturally healed since her pain went away. Sadly while Jeremy went to inform the doctors, Melissa suddenly died. After a time of mourning, Jeremy was inspired by a note written by his late wife to continue making music. He would go on to a successful career.

While it’s God’s best for His people to live a long life of divine health, the reality is that doesn’t always happen. We live in a fallen world where Satan comes to steal, kill, and destroy (John 10:10). “I Still Believe” reminded me of having a significant other that died at a young age. During the late 1990s, I became close friends with a woman who ended up spending time in a psychiatric hospital. Despite my praying for her, Jolene died of hardening of the arteries. She was only 38 years old.

“I Still Believe” demonstrates that true love involves sacrifices and sometimes suffering. Even when our prayers appear to go unanswered, God is still on the throne and has a good plan for our lives. Because movie theaters are currently closed, “I Still Believe” is available online from various sources. I recommended seeing this movie.

“For I know the thoughts that I think toward you, says the Lord, thoughts of peace and not of evil, to give you a future and a hope.” - Jeremiah 29:11
cancer Christian death faith God Holy Spirit Jeremy Camp Jesus movie review