Why I Stand with Rodney Howard-Browne 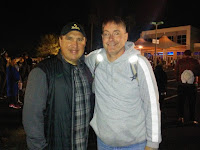 When preachers take a stand against religious tradition or government tyranny, there will be believers and nonbelievers that won’t like it. Such is the case with Rodney Howard-Browne, a South African-born revivalist who also pastors The River Church outside Tampa, Florida. Initially, Rodney became known for holy laughter manifestations at his meetings. While that still occasionally happens, the focus of Rodney’s ministry is seeing souls saved.

The first time I saw Rodney Howard-Browne was in Toronto in August 1996. God mightily touched me at those meetings. A few weeks later, Rodney started his church. I never got to visit there until 2002. In the meantime, I attended more Rodney Howard-Browne meetings at my home church in Minnesota and one in Pensacola, Florida. Contrary to popular belief, Rodney wasn’t part of the Brownsville Revival but did pray for Randy Clark, the minister God later used to spark the Toronto Blessing.

For almost two decades, I’ve made seasonal moves to Tampa and attended many services at The River plus went evangelizing with them a few times. In my opinion, this church is more committed to the Great Commission than any other I’ve been to. Every student at their Bible school is trained to be a soul-winner. Pastor Rodney is aiming to complete a 300-city tour before the end of the year. The purpose of this is to preach the gospel and equip believers to do the work of an evangelist.

Another thing I respect about Rodney Howard-Browne is his generosity. Every Sunday morning, his church sends out buses all over the Tampa Bay area to pick up people needing a ride. The River also provides free bags of groceries. After one Christmas Day service, Pastor Rodney fed the entire congregation a lamb dinner. Another free meal was offered the following week on New Years Day.

In recent years, Rodney has talked more about political matters during his services. At first, I wasn’t fond of listening to what sounded like conspiracy theories to me. Soon I realized God was using Rodney to warn Americans about our freedoms being lost if the wrong people are elected. Earlier this year, he gave me a copy of his latest book “Socialism Under the Microscope.”

During the current coronavirus pandemic, most pastors have gone to live streaming only. Rodney’s church had continued public gatherings but added the following precautions...

1) Enforced a six-foot distance between family groups in the auditorium as well as overflow rooms.
2) All the staff wore gloves.
3) Every person who entered the church received hand sanitizer.
4) In the farmer's market and coffee shop in the lobby, the six-foot distance was enforced with the floor specifically marked (even though farmer’s markets and produce stands are expressly exempted).
5) The church spent $100,000 on a hospital-grade air purification system that provided continuous infectious microbial reduction rated to kill microbes including those in the coronavirus family.

All this wasn’t good enough for Hillsborough County. This past Monday, Sheriff Chad Chronister issued a warrant for Rodney Howard-Browne’s arrest. This is the same sheriff who was honored on January 12th during a Law Enforcement Appreciation Day at The River (I was there for that service). Nevertheless, Rodney turned himself in and was released 30 minutes later after posting a $500 bond.

Some have criticized Pastor Rodney for “endangering” his congregation. I find this accusation ridiculous. Pastors cannot force people to attend their churches. Churchgoers come at their own volition. Rodney and his wife Adonica advised congregation members who were sick or fearful of the virus to stay home and watch services online.

Pastor Rodney has also been accused of being a lawbreaker. Many Americans have never taken an oath to defend the Constitution, which is the highest law of the land. Rodney and Adonica did that when they became naturalized citizens of the United States. The First Amendment clearly states our government has no right to prohibit the free exercise of one’s religion and to peaceably assemble.

Christians are to obey authorities except when it would cause them to violate God’s commandments. An example can be found in Acts chapter 5 when the apostles were commanded not to preach in the name of Jesus. Peter responded in verse 29, “We ought to obey God rather than men.” If Jesus, the Apostle Paul, John the Baptist, Esther, Daniel, and other prophets followed every man-made ordinance, none of them would have fulfilled their divine destinies.

I have questions for believers who have judged Rodney for not obeying the laws of the land. Would you have reported Jews in hiding to the Nazis had you lived under their regime during World War II? What if you reside in a Muslim or Communist-controlled nation where it’s against the law for Christians to have gatherings? This conflicts with Hebrews 10:25, “not forsaking the assembling of ourselves together, as is the manner of some, but exhorting one another, and so much the more as you see the Day approaching.”

Rodney Howard-Browne is not the only pastor who has been prosecuted for exercising his First Amendment rights. Last Sunday, a church service in Fort Lauderdale was shut down by four armed policemen. Another pastor in Louisiana was charged with misdemeanors for having services. The mayor of New York City has threatened fines and permanent closure against churches and synagogues (notice he didn’t mention mosques) who don’t practice social distancing. These could set precedents for politicians to come up with other excuses to close down churches. How many Christians are willing to put up with no public meetings if this continues beyond Easter?

Last Wednesday, Florida Governor Ron DeSantis issued a 30-day stay-at-home order but classified religious services as Essential Activities (many politicians have labeled liquor stores, marijuana shops, and abortion providers “essential“). Hours later, Pastor Rodney announced a temporary cancelation of services to protect his congregation from death threats his church received and false arrests by authorities. The next day, the Hillsborough County Council reversed its stance and recognized churches as essential despite opposition from the mayor of Tampa who is openly gay.

Whether or not you agree with Rodney Howard-Browne’s ministry, all believers should be supportive of him and other preachers standing up for their Constitutional rights. It’s often been said, “If you don’t stand for something, you will fall for anything.”

I choose to stand with Pastor Rodney.