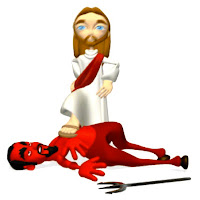 Mention the Great Commission and most Christians only think of “preaching the gospel to every creature.” Yet Jesus gave other commandments in the sixteenth chapter of Mark. One of which in verse 17 is to cast out devils. That commandment must be important. It is listed before speaking in tongues and laying hands on the sick.

Many churches in Western nations don’t do deliverance ministry at all. Some ministers believe Christians cannot have a demon. I can testify that this is not true. Over the years. I’ve witnessed numerous devils cast out of God’s people. I’ve done my share of exorcisms.

During the mid-1990s, I became close friends with “Stacy” (not her real name), a middle-aged woman often placed on my team during our church’s evangelism outreaches. Despite her faithfulness in sharing the gospel, Stacy was often oppressed. One particular afternoon while I prayed for Stacy, these words came out of her mouth: “You can’t have her! You can’t have her!” I recognized this as Satan speaking through my friend and commanded him to come out in Jesus’ name. Stacy fell over and was motionless on the floor for several minutes.

Sadly, my friend didn’t stay delivered as she continued giving place to the devil through bitterness. One night after an outreach, Stacy burst into the church yelling accusations against the evangelism pastor. She had to be forcibly removed from the premises. The last time I heard from Stacy was when a mutual friend handed me a note from her laced with profanity.

Christians can become “repossessed” by being disobedient to God’s word. After healing the man by the pool called Bethesda, Jesus told him in John 5:14, “See, you have been made well.  Sin no more, lest a worse thing come upon you.”  Jesus also warned in Matthew 12…

43 “When an unclean spirit goes out of a man, he goes through dry places, seeking rest, and finds none.
44 Then he says, ‘I will return to my house from which I came.’ And when he comes, he finds it empty, swept, and put in order.
45 Then he goes and takes with him seven other spirits more wicked than himself, and they enter and dwell there; and the last state of that man is worse than the first. So shall it also be with this wicked generation.”

Every human is full of something. One must feed on God’s word to stay strong spiritually especially after receiving deliverance. Otherwise, that leaves room for the devil to get in.

Last Sunday, my friend Gretchen and I ministered to a woman who “lost her faith” due to terrible things that happened to her and her eight children. Mercedes insisted the devil has more power than God. Gretchen and I spent about twenty minutes testifying how God will provide and protect those who put their trust in Him. Mercedes’ countenance changed after she prayed to recommit her life to the Lord.

I like what Jim Kaseman says: “If you talk more about what the devil is doing than what God is doing, then you are a devil worshipper.” We don’t need to be demon hunters looking for demons behind every doorknob. But when they manifest, then we must be ready to deal with them.

“You are of God, little children, and have overcome them, because He who is in you is greater than he who is in the world.” - 1 John 4:4
belief Bible cast out Christian Christianity deliverance demon devil exorcism faith God Great Commission heaven hell Jesus Christ judgment religion salvation Satan sin