Pray For Your Nation 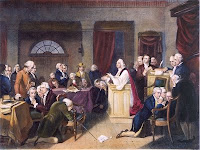 Christians in the United States are becoming increasingly discouraged from sharing the gospel in public places. Because of fears over the coronavirus, politicians have also placed limitations upon church meetings. California Governor Gavin Newsom recently issued a ridiculous ban from singing and chanting in places of worship. Yet Ronald Reagan (who was also a California governor) stated, “Freedom prospers when religion is vibrant and the rule of law under God is acknowledged. When our Founding Fathers passed the First Amendment, they sought to protect churches from government interference.”

This country was founded mostly by Bible-believing men who intended to keep the government out of the church, not God out of the government, In a statement made to the General Assembly of the State of Virginia in 1778, James Madison (the chief architect of the Constitution) said, “We’ve staked the whole future of American civilization not upon the power of government, far from it. We have staked the future of all of our political institutions upon the capacity of each and all of us to govern ourselves according to the Ten Commandments of God.”

It’s also worth noting that in 1812, President Madison signed a federal bill that economically aided the Bible Society of Philadelphia in its goal of the mass distribution of the Bible. If the American Civil Liberties Union had existed back then, they likely would have complained about “separation of church and state.”

Proverbs 29:2 says, “When the righteous are in authority, the people rejoice; but when the wicked man rules, the people groan.” What if German Christians in the 1920s and 1930s had fasted and interceded for their country more? That might have prevented Adolf Hitler from coming into power.

Regardless of where you live, I encourage you to keep praying for your nation. 1 Timothy 2:1-2 says, “Therefore I exhort first of all that supplications, prayers, intercessions, and giving of thanks be made for all men, for kings and all who are in authority, that we may lead a quiet and peaceable life in all godliness and reverence.” The prophet Daniel brought change to Babylon through his prayers. God can do the same through you!

“If My people who are called by My name will humble themselves, and pray and seek My face, and turn from their wicked ways, then I will hear from heaven, and will forgive their sin and heal their land.” - 2 Chronicles 7:14
Adams Bible church Declaration of independence founding fathers God government heritage Jefferson liberty prayer religion schools separation spiritual state United States of America Washington