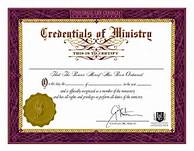 Years ago when Rodney Howard-Browne first started out in ministry, he was frequently asked to present ordination papers he didn’t have. Ironically once the revivalist got his papers and offered to show them to pastors interested in him speaking at their churches, Rodney was told they weren't necessary.

People have asked if I’ve been ordained or licensed as a minister. Yesterday that became official through Christ’s Mandate for Missions. Certainly, there are advantages to having such credentials. One would need them to legally conduct weddings. I hadn’t really sought this but asked the Lord to make it possible in His timing. As an evangelist, my focus has been preaching the gospel on the streets and through the Internet. Nevertheless, I still received invites to minister in churches.

Nowadays anyone can show off a certificate declaring themselves a minister. An organization called the Universal Life Church has instantly ordained over 20 million people free of charge. They include celebrities such as Conan O'Brien, Kathy Griffin, Queen Latifah, and Lady Gaga. Even the infamous atheist Madalyn Murray O'Hair once received ordination through this so-called church, which has only two tenets:

This reminds me of what Judges 17:6 says, “In those days there was no king in Israel; everyone did what was right in his own eyes.” A piece of paper does not make anyone a minister in the eyes of God if they don’t know Him.

Jesus said in John 15:16 (KJV), “Ye have not chosen me, but I have chosen you, and ordained you, that ye should go and bring forth fruit, and that your fruit should remain…” The Greek word here for ordain is tithēmi, which means “set”, “put”, “lay down”, “make”, and “appoint.”

1 make (someone) a priest or minister; confer holy orders on.

2 order or decree (something) officially

The Bible talks about God ordaining things such as “the moon and the stars” (Psalm 8:3) and other positions of authority. Romans 13:1 says, “Let every soul be subject to the governing authorities. For there is no authority except from God, and the authorities that exist are appointed by God.” Just like in John 15:16, the King James Version uses the word “ordained” in place of appointed. Ordain can also be defined as “set apart.”

Near the end of 1995 after having been a Christian for almost five years, I perceived the Lord was calling me to full-time ministry. That was soon confirmed through this prophetic word I received from a pastor I hadn’t met before: “I have chosen thee and I have ordained thee...not man...before the foundations of this earth.” A short time later I worked at the Billy Graham Evangelistic Association until the Lord directed me to step out as a traveling missionary.

Every believer is a minister of reconciliation (2 Corinthians 5:18). Whether or not you receive ordination, obeying the Great Commission doesn't require the approval of man.

“Before I formed you in the womb I knew you; Before you were born I sanctified you; I ordained you a prophet to the nations.” - Jeremiah 1:5