Born To Be Alive 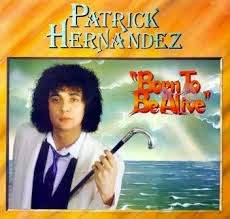 If someone were to guess what my all-time favorite song is, one might assume it would be a hymn or inspirational tune. There have been a few that touched me over the years. However, one particular song stands out from the rest.

In late July 1979, I was fifteen years old and went on vacation with my family. One night in a motel room, I turned on my transistor radio and for the first time heard “Born to Be Alive” by Patrick Hernandez. I already knew about the song since Casey Kasem had announced it was #1 on Billboard’s disco chart. I liked it immediately with its entrancing synthesizer sounds, dreamy strings, and catchy guitar riffs.

Two weeks later (and exactly 40 years ago today), “Born to Be Alive” debuted on “American Top 40” at #40. I taped the song off the radio and for the next several days played it over and over (even today it still gives me goosebumps). Soon I bought the Patrick Hernandez album of the same name. Meanwhile, I continued rooting for “Born to Be Alive” to hit #1 on the Hot 100. Despite only peaking at #16, the song earned a gold record in the U. S. for selling over one million copies.

Around this time, I started hanging out at a local roller rink. There I repeatedly requested to hear “Born to Be Alive.” The music at this roller rink was usually kept up-to-date. For some reason, they didn’t get a copy of the Patrick Hernandez song until after it fell off the charts. I got frustrated whenever the record played during “girls only.” Perhaps that was done on purpose. The floor guards often told me to stop skating so fast when my favorite song came on the sound system. After becoming a floor guard myself over three years later, I made sure my first record played was “Born to Be Alive.”

Although “Born to Be Alive” is not a gospel song, a portion of its lyrics could describe my present-day lifestyle as a missionary…

I have written an evangelistic takeoff of “Born to Be Alive” called “Must Be Born Again” that I might release someday. In the meantime, I will continue listening to Patrick’s song as a reminder God wants us to enjoy the life He has given us.