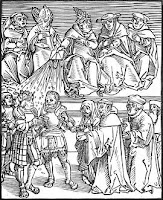 In recent weeks there have been reports of two well-known Christians drifting away from the faith. The first was a former pastor who wrote the bestseller “I Kissed Dating Goodbye.” Joshua Harris later apologized to those who were negatively impacted by the book. He has since separated from his wife and participated in a gay pride event. The other is Hillsong worship leader Marty Sampson. This past week he wrote an Instagram post saying, “I’m genuinely losing my faith...and it doesn’t bother me.” Marty later deleted that post and clarified he wasn’t renouncing Christianity but admitted “it’s on incredibly shaky ground.”

1 Timothy 4:1-3 and 2 Thessalonians 2:3 warn of great apostasy in the last days. Webster’s 1828 dictionary defines apostasy as “an abandonment of what one has professed; a total desertion, or departure from one's faith or religion.” Heresy hunters falsely label preachers they don’t agree with as “apostates.” An apostate is “one who has forsaken the church, sect or profession to which he before adhered.”

Some theologians have suggested Joshua and Marty never knew the Lord to begin with. Baloney! Jesus said in Matthew 24:13, “But he who endures to the end shall be saved.” Just like people can leave a marriage, Christians can choose to renounce their relationship with the Lord. I was 17 when first asking Jesus into my heart but eventually fell into a hedonistic lifestyle. Had I died just before recommitting my life to Him, I’d probably be in hell right now. One can lose their salvation if they fall away by living in unrepentant sin and deny knowing the Lord (2 Timothy 2:12).

Over the years I’ve met people who said they used to be Christians but turned their backs on Him. Sometimes it’s in response to setbacks and disappointments. Hebrews 3:12 warns, “Beware, brethren, lest there be in any of you an evil heart of unbelief in departing from the living God.” We must remind ourselves we live in an imperfect world largely influenced by Satan. People will let us down but not God.

Other causes of apostasy include worldliness, persecution, and embracing wrong teachings. 1 Timothy 4:3 says, “For the time will come when they will not endure sound doctrine, but according to their own desires, because they have itching ears, they will heap up for themselves teachers; and they will turn their ears away from the truth, and be turned aside to fables.” That’s why it’s important to study Scripture and cast down imaginations that go against the word of God (2 Corinthians 10:5).

It’s especially dangerous when mature believers wander from the truth and fall into apostasy. Look at Hebrews 6…

4 For it is impossible for those who were once enlightened, and have tasted the heavenly gift, and have become partakers of the Holy Spirit,
5 and have tasted the good word of God and the powers of the age to come,
6 if they fall away, to renew them again to repentance, since they crucify again for themselves the Son of God, and put Him to an open shame.

At the same time, it’s not up to us to judge if an apostate has reached the point of no return. Only God knows the status of a man’s heart. We shouldn’t underestimate His mercy. Peter walked with the Lord for over three years and then briefly denied knowing Him but was restored. I believe He gives other backsliders opportunities to repent. God can use us in helping those struggling in their Christian walk. At the very least, we should pray for people like Joshua and Marty and (when possible) speak the truth in love to them.

“Brethren, if anyone among you wanders from the truth, and someone turns him back, let him know that he who turns a sinner from the error of his way will save a soul from death and cover a multitude of sins.” - James 5:19-20
apostate backslide Bible defection desertion drift away false God heresy Holy Spirit Jesus leave truth wander