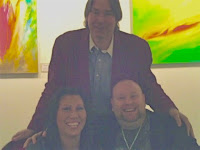 A few weeks ago, reports surfaced of immoral behavior involving Canadian-born evangelist Todd Bentley. Three of his former associates who I’m friends with on Facebook issued public warnings about him. Todd has denied most of these accusations. Meanwhile, a tribunal has been set up to investigate the charges. At the time of this writing, I’ve not heard of any legal action taken against Todd.

Unless he is proven guilty, I’m choosing to believe the best about Todd Bentley (1 Corinthians 13:7). It was around 2002 when I started hearing about him. His name stood out to me because I had a junior high classmate with the same name.

The first time I heard Todd Bentley minister was at The River at Tampa Bay church in 2004. He wasn’t the scheduled speaker but Pastor Rodney Howard-Browne invited him to come up to the pulpit for a few minutes. Because he’s from Canada, I was surprised to hear Todd preach like an American Pentecostal.

Over the next two years, I listened to more messages by Todd Bentley. Cuts from his albums “Soaking in the Secret Place” and “Marinating” were played on my Internet station Signs & Wonders Radio. I also read his testimony book “Journey Into the Miraculous.” Admittedly, I was somewhat jealous of Todd’s rapid progression in ministry but respected his spiritual hunger and passion for the lost.

In 2007, I attended a Todd Bentley conference in London, Ontario. One night in a prayer line, Todd laid hands on me without looking me in the eye. I thought that was odd. Another time, I stood by his book table while he was talking with someone. I hoped to at least say “hello” to him but that didn’t happen.

A year later, a series of Todd Bentley meetings in Lakeland, Florida quickly erupted into a revival that lasted several months. I went there for a few days in May. During my first night at the revival, Todd offered to pray for all the missionaries. Just before I reached the platform, Todd sent his associates to pray for the rest of us waiting in line. That caused me to question if God didn’t want me having contact with Todd. Nevertheless, he laid hands on me again at an anointing service three nights later. We also became friends on Facebook.

Throughout the summer of 2008, I watched more revival meetings on GodTV. I appreciated what God was doing through Todd Bentley but perceived not everything was okay in Lakeland. The revival soon cooled off when Todd’s marriage problems became public knowledge. Since I had gone through a divorce that year, I could relate to the flak Todd experienced. It’s sad when Christians judge others without knowing all the facts.

In 2009, I watched videos of Todd Bentley going through a restoration process with Rick Joyner of MorningStar Ministries. In one of them, Todd’s new wife Jessa explained how they came together while Todd was getting a divorce. Jessa clarified that no adultery occurred but got too emotionally involved with Todd before his divorce was finalized. It was also revealed Todd and his first wife Shonnah had marital difficulties before Jessa came into the picture.

In February 2010, the Lord led me to Charlotte, North Carolina to attend meetings at MorningStar. By this time Rick released Todd Bentley to do public ministry again. Just before one evening service, I got to meet with the Bentleys for a couple of minutes. Todd prayed a blessing over my ministry without me asking him to. Since a brief return to MorningStar later that year, I haven’t attended any of Todd’s meetings but often read his Facebook posts.

In response to the recent allegations, many Todd Bentley meetings were canceled and partners have withdrawn their support. A few Christians insist he should no longer be behind the pulpit. I disagree as long as Todd has repented of all wrongdoing. Romans 11:29 says, “For the gifts and the calling of God are irrevocable.” Televangelist Jim Bakker had a moral failure and was divorced by his wife Tammy while behind bars. God still brought him back into ministry. Jim didn’t even want to go on TV again but was led to start a television program he now hosts with his current wife Lori.

Friends of mine in Massachusetts are hosting a Todd Bentley meeting in their home next weekend. I pray that heaven’s purposes will be fulfilled there. No matter how many times someone may mess up, God will use anyone who humbles himself and is repentant.


“For a righteous man may fall seven times and rise again, but the wicked shall fall by calamity.” - Proverbs 24:16