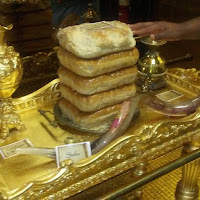 Once I witnessed to a man promoting hunger awareness. This man didn’t believe in the existence of heaven or hell. Therefore, he thought feeding the hungry was more important than preaching the gospel. Paul wrote in 1 Corinthians 13:3, “And though I bestow all my goods to feed the poor, and though I give my body to be burned, but have not love, it profits me nothing.” A nonbeliever’s good works won’t matter if he’s lost for eternity.

Is it important to feed the hungry? Absolutely. Scripture exhorts us to do so (Psalm 146:7, Romans 12:20). The miracles of Jesus included multiplying loaves and fishes to feed the thousands who gathered to hear His word. In recent years, I’ve gone out of my way to give food to panhandlers as well as the gospel.

Although food is a basic necessity, we should focus more on cultivating and satisfying our spiritual hunger. My former pastor Mac Hammond taught a series on that. He pointed out we can build an appetite for anything that consumes our thought life. While serving in the Air Force, some of Mac’s fellow platoon members played cribbage. Initially, he didn’t care for the card game but soon developed an addiction for it.

When I witness to someone who’s already saved, I often ask, “When’s the last time you read your Bible?” I’ve heard a variety of answers. One young Christian told me he hadn’t read his Bible in two months. So I asked him, “Who would happen if you went two months without eating food?” Our spirits become malnourished unless we consistently feed on the Bread of Life.

Burger King once sang in their commercials, “Aren’t you hungry?” The King of Kings said in Matthew 5:6, “Blessed are those who hunger and thirst for righteousness, For they shall be filled.” I want to be hungry for His word and His presence. How about you?