More Than a Prophet 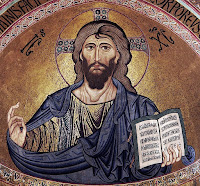 Muslims believe Jesus was only a prophet. The New Oxford American Dictionary defines prophet as “a person regarded as an inspired teacher or proclaimer of the will of God.” A prophet sent from God will tell the truth regardless of the hearer receiving it. So if a true prophet doesn’t lie, let’s examine some of Jesus’ words from the Bible (which was written 500 years before the Koran).

First, Jesus said in John 14:6, “I am the way and the truth and the life. No one comes to the Father except through Me.” Notice Jesus said He was THE truth…not a truth. He also said in John 8:31-32, “If you abide in My word, you are My disciples indeed. And you shall know the truth, and the truth shall make you free.”

Followers of Islam argue that Allah (their word for God) had no son. Jesus referred to Himself as the Son of God in John 3:16, “For God so loved the world that He gave His only begotten Son, that whoever believes in Him should not perish but have everlasting life.” He later said in John 3:36, “He who believes in the Son has everlasting life; and he who does not believe the Son shall not see life, but the wrath of God abides on him.”

The Koran encourages its followers to “kill the infidels” (Surah 9:5). Jesus said a few things contrary to that…

“But I say to you, love your enemies, bless those who curse you, do good to those who hate you, and pray for those who spitefully use you and persecute you.” - Matthew 5:44

“They will put you out of the synagogues; yes, the time is coming that whoever kills you will think that he offers God service. And these things they will do to you because they have not known the Father nor Me.” - John 16:2-3

Muslims deny that Jesus died on the cross. On the other hand, Jesus stated in Matthew 17:23, “…and they will kill Him, and the third day He will be raised up.”

When giving the Great Commission, Jesus said in Mark 16:17-18, “And these signs will follow those who believe: In My name they will cast out demons; they will speak with new tongues; they will take up serpents; and if they drink anything deadly, it will by no means hurt them; they will lay hands on the sick, and they will recover.” I’ve seen that power manifest using Jesus’ name, not Muhammed, whom Muslims esteem as the greatest prophet.

Many Muslims are concerned about their good deeds outweighing the bad. A religion (not a relationship) puts people into bondage. Jesus said in Matthew 11:28-30, “Come to Me, all you who labor and are heavy laden, and I will give you rest. Take My yoke upon you and learn from Me, for I am gentle and lowly in heart, and you will find rest for your souls. For My yoke is easy and My burden is light.”

Jesus also said in John 14:15, “If you love Me, keep My commandments.” One of them is you must be born again. (John 3:3, 7) No amount of good works will remit sin. “Most assuredly, I say to you, whoever commits sin is a slave of sin. And a slave does not abide in the house forever, but a son abides forever. Therefore if the Son makes you free, you shall be free indeed.” (John 8:34-36)

Based on what Jesus said, it’s obvious He is more than a prophet. He is the Son of God who is coming back again. Are you ready for His return?

“Nor is there salvation in any other, for there is no other name under heaven given among men by which we must be saved." - Acts 4:12