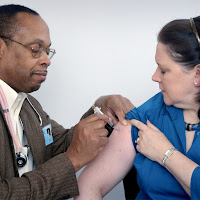 This year’s coronavirus pandemic has stirred up debates within the body of Christ regarding churches meeting in person and the moral aspects of wearing masks. Another issue that has come up is vaccinations. Some Christians have talked of getting one for COVID-19 when that becomes available. Others like myself balk at the idea. The financial elite are using this “plandemic” to push a socialist agenda and reduce the world’s population. (For more information on this, I recommend reading “The Phantom Virus” by Rodney Howard-Browne and Paul L. Williams.)

The medical practice of vaccinating has been around for just over two centuries. People in the Bible lived long lives without them. Nevertheless, there are vaccinations necessary in today’s society. I received a few as a boy before starting school. I also recall getting shots in 1985 while being inducted into the U. S. Army. Vaccinations are required to enter selected countries. If I were to go to India, for example, I would need to make sure I’m inoculated for hepatitis A, tetanus, and typhoid.

Many will argue diseases like polio and measles have been contained through vaccinations. However, there are reports of vaccines connected with the spread of autism. A close friend of mine who worked twenty years as a special education teacher can verify this. Recently, a worship leader I know posted a Facebook comment about his intent on getting a COVID-19 vaccine. One woman replied by pointing out her two-year-old niece “was killed by vacs - made me research and was horrified.”

Every winter, I see advertisements for flu shots. That reminds me of a story told by Kenneth Copeland. One time when his children were young, Kenneth gathered his family in the living room and announced it was time to take their flu shots. The kids had concerned looks on their faces until their father clarified to get their Bibles out. They “injected” themselves with healing Scriptures.

God has equipped us with something else to fight off sickness. It’s called an immune system. Our personal decisions can strengthen or weaken it. The few times I’ve gotten sick as a Christian has mostly been the result of eating much junk food. Amish people undergo immunization at a lower rate than the general public but experience lower levels of diseases because of healthier diets. Proper hygiene also stops the spread of germs.

Whether or not you receive vaccinations is between you and the Lord. Christian doctors like Don Colbert approve of some but advise against others that contain harmful substances like mercury. Some vaccines use fetal tissues from abortions. I encourage those of you uneasy about taking a particular vaccination to follow your conscience. Ultimately, Jesus is our healer.

“And let the peace of God rule in your hearts, to which also you were called in one body; and be thankful” - Colossians 3:15