My Response to Copeland Critics 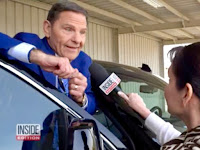 One of my favorite preachers is Kenneth Copeland. Every morning I read “From Faith to Faith”, a powerful devotional written by him and his wife Gloria. In addition to seeing them on TV, I’ve heard the Copelands many times at my home church in Minnesota plus attended some of their Victory Campaigns. This past January, I visited Eagle Mountain International Church near Fort Worth, Texas pastored by Kenneth’s daughter Terri and her husband George Pearsons. Kenneth often speaks there.

As a baby Christian, I wasn’t fond of Kenneth Copeland when first hearing him as well as a few other Charismatic preachers. Eventually, I learned to overlook a minister’s personality and focus more on the content of their messages. I’ve since grown to appreciate Brother Copeland’s boldness, skillful knowledge of Scripture and his sense of humor.

Kenneth Copeland is often lambasted by religious folk who don’t like his teachings and him owning an airplane. It should be mentioned that Brother Copeland was a licensed pilot before going into the ministry. Gloria often said she would never marry a preacher and later added “…and I didn’t. I married a commercial pilot.”

Still, critics have targeted one comment made by Kenneth Copeland on his “Believer’s Voice of Victory” program. While talking with Jesse Duplantis about their private jets, Brother Copeland stated that one reason he doesn’t fly commercial is because it’s like being “in a long tube with a bunch of demons.” Recently a reporter from “Inside Edition” rushed up to Copeland asking about that comment. Copeland clarified that he loves people and “we wrestle not against flesh and blood” (Ephesians 6:12). Charisma magazine founder Stephen Strang pointed out it would be similar to using other forms of public transportation like a Greyhound bus. As a missionary who’s traveled on many of those, I say “Amen!” Long trips can be aggravating especially when dealing with other passengers who are disrespectful and use profanity.

Preachers need privacy to pray and study if they are to be effective vessels for the Lord. I heard Kenneth Copeland point out his mentor Oral Roberts initially rode on commercial flights but was constantly approached for autographs and prayer requests. Roberts needed time alone with God to prepare for the numerous meetings he held. During His earthly ministry, Jesus often had to get away from crowds so He could have quality time with the Father. Although I have witnessed to people while flying or riding the bus, I usually keep to myself by putting on earphones and listening to anointed music or sermons to stay in the presence of God.

Critics continue fussing about the money some ministries generate. One Facebook friend posted a meme listing the alleged net worth of Kenneth Copeland and other well-known preachers with the caption, “The gospel is to be told, not sold.” The gospel is free but it takes finances to get the message out through media and the printed page plus sending ministers to various places. In the Parable of the Talents, Jesus said if we're faithful over little, He will make us ruler over much. The Copelands have faithfully preached the Word of God for over 50 years.

The idea that ministers aren't supposed to have much money is out of the pit of hell. God doesn’t mind His people having things as long as the things don't have us. One thing I respect about the Copelands is their generosity. Kenneth Copeland Ministries has a disaster relief team that helps partners affected by wildfires and hurricanes. Back in the 1990s, they rebuilt numerous churches that were destroyed by arsonists. So-called prosperity preachers probably give away more of their revenue than all of their critics combined.

So if you don’t like Brother Copeland, then don’t listen to him. What I don’t like is seeing edited versions of sermons and interviews that make preachers appear to say things they didn’t really mean. That’s why we need discernment when reading or watching stuff posted by secular media outlets and religious watchdogs.

“Therefore take heed how you hear. For whoever has, to him more will be given; and whoever does not have, even what he seems to have will be taken from him.” - Luke 8:18
believe Bible Charisma critic false prophet finger God heresy hunter Holy Spirit Inside Edition Jesus plane point preacher religious watchdog YouTube