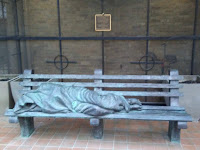 While walking around downtown San Antonio last Sunday, I noticed this “homeless Jesus” statue in front of a church. I didn’t examine the accompanying plaque but assumed it was inspired by Matthew 8:20, “…the Son of Man has nowhere to lay His head.” Later, I learned it quoted Matthew 25:40 (ESV), “Assuredly, I say to you, inasmuch as you did it to one of the least of these My brethren, you did it to Me.” The Lord certainly wants us to be compassionate to the less fortunate. That doesn’t mean He wants us living like them.

One thing that repels sinners from Christianity is religious folk promoting the idea that Jesus was poor. A few celebrities have more sense than some church-going people. Pamela Anderson told one interviewer, “I don't know anybody…that would have people gambling for His underwear. That was some fine stuff He wore.” Jesus had to be prosperous because the Roman soldiers who crucified Him gambled for His expensive undergarments. Anderson went on to say, “The poor will follow the rich, the rich will follow the rich, but the rich will never follow the poor.”

Those who preach an impoverished Jesus need to study their Bibles more. Matthew 2:11 says, “And when they had come into the house, they saw the young Child with Mary His mother, and fell down and worshiped Him. And when they had opened their treasures, they presented gifts to Him: gold, frankincense, and myrrh.” Notice this verse mentioned a house. Contrary to the traditional Christmas story, this didn’t happen while Jesus was lying in a manger. The expensive gifts from the wise men were probably used to finance His family’s escape to Egypt.

During His earthly ministry, there were times Jesus and His disciples slept outside while traveling. However, they also had places to stay. John 1:38-39 mentions one of them. Matthew 4:13 talks about Him dwelling in Capernaum. So does Mark 2:1. The New American Standard Bible states, “…He was at home.” Later, four people dug a hole in the roof to let down a paralytic who was then healed. Being a carpenter, Jesus might have gone up to the roof to mend it.

Jesus had people that gave to His ministry. Luke 8:2-3 says, “and certain women who had been healed of evil spirits and infirmities—Mary called Magdalene, out of whom had come seven demons, and Joanna the wife of Chuza, Herod’s steward, and Susanna, and many others who provided for Him from their substance.” The Lord even kept a treasurer on His staff that embezzled from Him. How many pastors would do that today?

The only time Jesus took on earthly poverty was when He went to the cross. 2 Corinthians 8:9 says, “For you know the grace of our Lord Jesus Christ, that though He was rich, yet for your sakes He became poor, that you through His poverty might become rich.”

So when you have opportunities to share the gospel this holiday season, don’t let people feed you the lie that Jesus was poor. Who in their right mind would worship Someone who wants them lacking all the time? The Lord wants us blessed so we can be a blessing to others.

“And my God shall supply all your need according to His riches in glory by Christ Jesus.”