Little Christians That Could 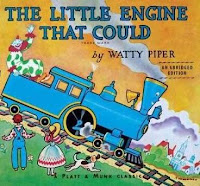 One of my favorite books growing up was “The Little Engine That Could” by Watty Piper. This story is about a group of toys on a train carrying them and some food. The train was about to go over a mountain when their engine suddenly died. The toys sought another engine to help them, but three big ones rejected their pleas. Then they encountered a smaller engine uncertain it could do the job. Nevertheless, the engine pulled the toys over the mountain while repeatedly saying, “I think I can…I think I can.”

Many believers belittle themselves when facing unfavorable circumstances. When instructed to confront Pharaoh to let the children of Israel go free, Moses complained, “O my Lord, I am not eloquent…I am slow of speech and slow of tongue.” (Exodus 4:10) Later when it was time to enter the Promised Land, most of the Israelites called themselves “grasshoppers” in comparison to the giants they had to fight off. (Numbers 13:33). Because of negative thinking, none of those Israelites possessed the land except for Joshua and Caleb forty years later.

Nowadays, a majority of Christians avoid obeying the Great Commission because of fear. Some have told me, “I can’t win souls like you.” Philippians 4:13 says, “I can do all things through Christ who strengthens me.” In ourselves, we cannot accomplish anything of eternal value. But God has created us to be more than conquerors (Romans 8:37) and to occupy till Jesus comes. (Luke 19:13)