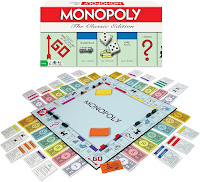 As a boy, I loved playing Monopoly. My parents originally taught me how to play this property trading board game. They soon resisted my requests to play it again because our games took too long. To pass the time on Christmas Eve, my sister and I often played Monopoly before Dad came home from work and we opened presents. One Christmas, Dad brought home a borrowed Nintendo Entertainment System that included a Monopoly cartridge. I played that several times on our TV.

The classic version of Monopoly released in 1935 has properties named after locations in or near Atlantic City, New Jersey. In recent years, numerous specialty editions have come out with renamed properties connected with movies, colleges, or other themes. Updates of the game include new game pieces and credit cards for purchases instead of cash.

This past Thursday, Hasbro announced Monopoly will get a “long overdue” socially conscious makeover. All sixteen of Monopoly’s Community Chest cards will be changed. Gone will be “outdated concepts” like collecting $10 for winning second place in a beauty contest. A website has been set up where people can vote for their favorite newer cards. Here are some examples…

“You rescue a puppy — and you feel rescued, too! GET OUT OF JAIL FREE.”

“You pass out umbrellas to people standing at a bus stop on a rainy Monday morning. COLLECT $10 FROM EACH PLAYER.”

“You held a neighborhood party — but you didn't recycle your trash! PAY $100.”

There’s already a Go Green edition of Monopoly for the environmentally-conscious. While I’m all for being good stewards of our planet’s resources and helping the less fortunate, I resent the idea of getting fined for not recycling or being forced to pay for someone else’s random act of kindness.

Hopefully, Hasbro will continue manufacturing Monopoly games with the original Community Chest cards. I have no interest in playing an edition appealing to those who have an unwarranted sense of entitlement. In real life, God rewards those who multiply their resources without being concerned about how people think of them.

“Take heed that you do not do your charitable deeds before men, to be seen by them. Otherwise you have no reward from your Father in heaven.” - Matthew 6:1