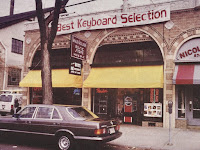 This past Wednesday I got together with an old friend. Adam Colt and I had lunch at an all-you-can-eat sushi restaurant and then picked up parts at a computer store. While driving me home, Adam mentioned a Facebook group for a defunct music store we both worked at. That prompted me to join the group and peruse through old photos of the store. That brought back memories.

In July 1988, I landed a full-time job at Knut-Koupeé Music (pronounced “Newt Coo-pay”). I was hired to sell keyboards and other pieces of sound equipment. Weeks before I had moved into an apartment just three blocks away. It was nice being able to walk to work instead of dealing with parking issues in the Uptown area of Minneapolis. Another benefit to my employment at Knut was buying discounted equipment for my home recording studio.

When I started working at Knut-Koupeé, I also deejayed several nights a week plus produced radio commercials. Working over 60 hours a week (particularly the ten-hour shifts at Knut) became too much for me. My mind got tired after standing around electronic equipment all day. I just wanted to chill out and relax instead of creating music.

After briefly resigning from DJ work, I temporarily become a “sub” at Knut. This worked out great as many coworkers often needed someone to cover for them when their bands landed last-minute gigs. Unfortunately, my employment at Knut-Koupeé ended on a sour note. A sudden policy change resulted in me not getting paid for several hours of work put in during March 1989. I filed a complaint with the state of Minnesota but wasn’t eligible to receive unemployment benefits.

Nevertheless, it had been a thrill for me interacting with others involved with the burgeoning Minneapolis music scene. Prince had guitars made by luthiers at Knut-Koupeé. Members of his band occasionally stopped in the store. One of my coworkers played keyboards for R&B singer Alexander O’Neal. Another one was a stage technician for The Jets.

Working at Knut-Koupeé also played a part in my spiritual life. One day I sold a synthesizer to a pastor and his wife who mentioned “Big Chick” Huntsberry attended their church. Hearing Prince’s former bodyguard share his testimony planted a seed in my heart that resulted in me giving my life to the Lord two years later. I pray all my other former coworkers will do likewise. Two of them died in the early 2000s. Hopefully, they had gotten saved and are now making music in heaven.