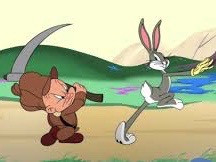 As a boy growing up in the 1970s, I preferred watching older cartoons on TV because they were funnier and had better animation. Most of the newer cartoons then were lifeless by comparison. During the late 1980s, animators seemed to run low on ideas. Miniaturized versions of established characters came out like “Muppet Babies”, “The Flintstone Kids”, and “A Pup Named Scooby-Doo.” By the 2000s, all the major networks ceased airing cartoons on Saturday morning. A few were still seen during prime time such as “The Simpsons.”

Occasionally, reboots of classic cartoons have been released. Earlier this week, the streaming service HBO Max announced it will show new “Looney Tunes" cartoons except the characters won’t have guns. A sample posted on YouTube shows Elmer Fudd chasing after Bugs Bunny with a scythe. One man tweeted: “Elmer Fudd without his gun, is like Yosemite Sam without a mustache.” This appears to be an attempt by left-leaning producers to undermine support for the Second Amendment. The politically correct crowd sure has a way of ruining everything.

It reminded me of something involving my favorite cartoon character. The canine superhero Underdog wore a ring that contained a super energy pill. Sometimes I noticed scenes of him eating the pill edited out. This was due to fears of it influencing children to take drugs. Yet in some episodes, Underdog referred to it as an “energy vitamin pill.” Most parents wouldn’t object to their children taking vitamins.

Over the years, some have argued cartoons promote violence. While I never cared for violent TV programs, kids are smart enough to know cartoons aren’t meant to be taken seriously. Even when you see characters trying to shoot or blow each other up, the good guys usually win. The Road Runner never gets caught by Wile E. Coyote. The same is true with Sylvester’s failed attempts to eat Tweety.

Of course, I now endorse animations used to promote Biblical values. I remember watching my share of “Davey and Goliath” episodes on TV but would prefer the more entertaining “VeggieTales.” Christians wanting to reach children with the gospel need to come up with Biblically accurate materials that aren't corny and boring.

As Bugs Bunny stated in one cartoon: “Don’t take life too seriously. You’ll never get out of it alive.”

“He will yet fill your mouth with laughter, and your lips with shouting.” - Job 8:21