What Color Is Jesus? 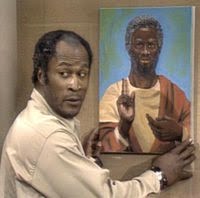 Sometimes while you’re out evangelizing, individuals will try to stump you with challenging questions. One I’ve heard primarily from African-Americans is: “What color is Jesus?” I remember ministering to one bitter black man who labeled Christianity “a white man’s religion” that would never work for him. In response, I testified about two African-Americans who got saved a few days before and were immediately healed of bodily injuries. This man was still resistant to the gospel.

People tend to picture the Lord based on their own culture. For centuries, Westerners have depicted the Son of God as a Caucasian. In recent years, there have been increasing amounts of artwork of a black Jesus (the one pictured here is from the old TV sitcom “Good Times”). One well-known preacher who is part Native American jokingly claims Jesus was an Indian because the Bible says He is “chief cornerstone.” Since Jesus lived most of His earthly life in Palestine, one could speculate He had a tan complexion like that of a Middle Eastern person.

Perhaps God didn’t allow the writers of the Bible to reveal a clear description of Jesus’ skin color because He doesn’t want His appearance to be idolized. Exodus 20:4 says, “You shall not make for yourself a carved image—any likeness of anything that is in heaven above, or that is in the earth beneath, or that is in the water under the earth.” I don’t believe it’s wrong to have statues of the Lord as long as we don’t bow down to them. We are to worship Him “…in spirit and truth.” (John 4:24)

Regardless of Jesus’ race, He certainly wasn’t pleasant to look at when He was crucified. Isaiah 53:2-3 says this of the suffering Messiah, “He has no form or comeliness; and when we see Him, there is no beauty that we should desire Him. He is despised and rejected by men, a Man of sorrows and acquainted with grief. And we hid, as it were, our faces from Him; He was despised, and we did not esteem Him.” But in Revelation chapter 1, the Apostle John wrote this description of the glorified resurrected Christ…

14 His head and hair were white like wool, as white as snow, and His eyes like a flame of fire;
15 His feet were like fine brass, as if refined in a furnace, and His voice as the sound of many waters;
16 He had in His right hand seven stars, out of His mouth went a sharp two-edged sword, and His countenance was like the sun shining in its strength.

Who cares if Jesus is white, black, brown, red, or yellow? Jesus came to save all of mankind from spending eternity in hell. So how should you answer someone who asks, “What color is Jesus?” Here’s an analogy the Lord gave me: If you were trapped in a burning house and a fireman came to rescue you, would the race of that fireman matter?

“It's news I'm most proud to proclaim, this extraordinary Message of God's powerful plan to rescue everyone who trusts him, starting with Jews and then right on to everyone else!” - Romans 1:16 (The Message)
appearance Bible black brown color complexion Holy Spirit Jesus Messiah race racism red skin Son of God White yellow