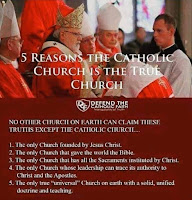 An objection some people bring up regarding Christianity is there are different denominations. Splits have occurred in other religions. Nevertheless, many church groups claim theirs is the only “true church” such as this meme circulating on social media. I have friends who are Catholic. So my intent here is not taking potshots at their church. Still, I felt inspired to write this rebuttal…

1. “The only Church founded by Jesus Christ.” Jesus said in Matthew 16:18, “And I also say to you that you are Peter, and on this rock I will build My church, and the gates of Hades shall not prevail against it.” The “rock” is not Peter according to Catholic tradition but the revelation he had that Jesus Christ is the Son of God. It’s also worth noting churches couldn’t legally meet in the Roman Empire until Christianity was made the state religion three centuries after Christ’s ascension.

2. “The only Church that gave the world the Bible.” Jeremiah 1:12 (ESV) says that God watches over His word to perform it. Various scribes were used over a period of 1,500 years to bring the Scriptures to us. None of these men referred to themselves as Catholic.

3. “The only Church that has all the Sacraments instituted by Christ.” The only two sacraments mentioned in the New Testament are water baptism and communion. Those sacraments are not exclusive to Catholics. Most Bible-believing churches observe them.

4. “The only Church whose leadership traces its authority to Christ and the Apostles.” Churches are still being founded today by apostles who don’t identify as Catholic. Ephesians 2:20 says, “having been built on the foundation of the apostles and prophets, Jesus Christ Himself being the chief cornerstone.” How many Catholic churches have prophets giving divine utterances to their congregations? Probably few if any.

5. “The only true ‘universal’ Church on earth with a solid, unified doctrine and teaching.” Catholics are taught to believe unscriptural ideas such as purgatory, the worship of Mary plus her perpetual virginity, and praying to deceased saints. In the New Oxford American Dictionary, one of its definitions of catholic is “including a wide variety of things; all-embracing.” John Alexander Dowie once founded a fellowship in Chicago called the Christian Catholic Church that wasn’t connected at all with Catholicism.

No church is perfect because it is made up of imperfect people. What unites all believers (Catholic, Protestant, and otherwise) is knowing Jesus Christ as Lord and Savior. We are to trust in Him alone for our salvation, not an institution.

“For God so loved the world that He gave His only begotten Son, that whoever believes in Him should not perish but have everlasting life.” - John 3:16