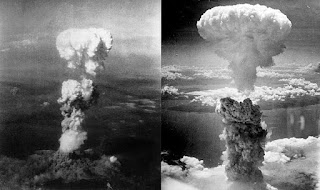 Today is the 75th anniversary of an atomic bomb devastating Nagasaki, Japan. Three days earlier in 1945, the first atomic bomb used in warfare was dropped on Hiroshima. Historians have debated whether the United States was justified in using those bombs. It’s tragic how the bombings killed tens of thousands of people. However, many more lives would have been lost had the U.S. needed to invade the country that four years earlier initiated hostilities with the attack on Pearl Harbor. President Truman’s goal for authorizing the bombings was to convince the Japanese to surrender and bring a quicker end to World War II.

I grew up during the Cold War between the United States and the Soviet Union. Fears of a nuclear exchange were triggered by watching made-for-TV movies like “World War III” and “The Day After.” Although the USSR dissolved in 1991, Russia still has nukes as well as a few other countries. Rogue nations like Iran have made progress in developing their own weapons of mass destruction. It’s scary to think about what would happen if they follow through on their numerous threats against Israel and the West.

However, I believe prayer plus a strong military has protected the United States and other countries from a nuclear attack. God wants to bring in a large end-time harvest of souls. Things will be different once the church is raptured. 1 Thessalonians 5:2-3 says, “For you yourselves know perfectly that the day of the Lord so comes as a thief in the night. For when they say, ‘Peace and safety!’ then sudden destruction comes upon them, as labor pains upon a pregnant woman. And they shall not escape.”

Certain Scriptures some scholars have considered symbolic could be descriptions of a nuclear conflict. Revelation 6:12-13 says, “I looked when He opened the sixth seal, and behold, there was a great earthquake, and the sun became black as sackcloth of hair, and the moon became like blood. And the stars of heaven fell to the earth, as a fig tree drops its late figs when it is shaken by a mighty wind.” The “stars from heaven” could be missiles from space.

Zechariah 14:12 gives an accurate description of someone exposed to an atomic explosion: “And this shall be the plague with which the Lord will strike all the people who fought against Jerusalem: Their flesh shall dissolve while they stand on their feet, Their eyes shall dissolve in their sockets, And their tongues shall dissolve in their mouths.” This and similar prophecies could be about the Battle of Armageddon or another future conflict like the war of Gog and Magog in Ezekiel 38.

Do these scenarios frighten you? They shouldn’t if you know Jesus. Psalm 91:7 says,“A thousand may fall at your side, and ten thousand at your right hand; But it shall not come near you.” God knows how to protect His people. If you are uncertain of your eternal destiny, don’t delay getting your life right with the Lord. Tomorrow may be too late.