My Faith Compels Me to Vote Red 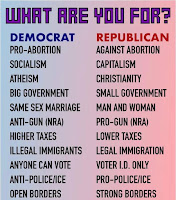 Once again, we are in the midst of an election that is becoming more contentious than in 2016. As previously stated in this blog, I vote for Republican candidates because that party’s platform is more in line with Judeo-Christian values. Nevertheless, I have a few friends and relatives who vote for Democrats. I won’t belittle their convictions but question how professing believers can support policies that go against God’s word.

There’s a meme circulating online by progressive Christians titled “My Faith Compels Me to Vote Blue.” Here’s my response to all their listed reasons…

“Refugees and immigrants should be fully welcomed.” I’m okay with foreigners moving to America if they do so legally and assimilate as law-abiding citizens. I don’t agree with letting just anyone cross our borders. Would you welcome a stranger into your home without knowing his intentions? What if that stranger wanted to rob you or cause harm to your family?

“All people deserve access to affordable healthcare.” I agree medical costs could be less expensive. However, I believe in divine healing and see a doctor only when necessary. 2 Chronicles 16:12 says, “And in the thirty-ninth year of his reign, Asa became diseased in his feet, and his malady was severe; yet in his disease he did not seek the Lord, but the physicians.”

“Women should have autonomy over their own bodies.” What about the bodies of unborn children inside pregnant women? Shouldn’t they have a right to live? Instead of encouraging abortion, those babies can live by promoting adoption as an alternative.

“Every race and gender and orientation deserves respect.” The Bible forbids homosexuality and transvestism. Christians can share the love of Jesus with those practicing immoral lifestyles without condoning them. Romans 1:32 warns, “…who, knowing the righteous judgment of God, that those who practice such things are deserving of death, not only do the same but also approve of those who practice them.”

“Mass incarceration and the death penalty are not pro-life.” Our prison system could use some improvements. However, the Bible calls for capital punishment upon those who commit murder. Genesis 9:6 says, “Whoever sheds man’s blood, by man his blood shall be shed; For in the image of God He made man.” It’s contradictory for pro-choice advocates to say a woman can murder her innocent unborn child but then claim the death penalty is wrong.

“The planet and atmosphere are our responsibility to care for.” I agree man should be good stewards of the earth’s resources. However, Christians should be more concerned with people’s eternal destinies. The only thing we can take to heaven with us is souls. God will someday renovate this world with fire. (see 2 Peter 3:10)

“All faith traditions are equally valid.” Jesus said in John 14:6, “I am the way, the truth, and the life. No one comes to the Father except through Me.” Christians shouldn’t be preaching doctrines that discourage people from getting born again. Jesus told the Pharisees in Matthew 15:6, “Thus you have made the commandment of God of no effect by your tradition.”

“Poverty and hunger are unacceptable.” When doing street ministry, I go out of my way to offer food and then the gospel to homeless people. Sadly, some individuals are poor and hungry because they choose to be. 2 Thessalonians 3:10 commands, "If anyone will not work, neither shall he eat.” Christians shouldn’t endorse government programs that promote welfare over employment.

“Black lives matter.” So do the lives of Latinos, Asians, Native Americans, and Caucasians. Acts 17:26 says, “And He has made from one blood every nation of men to dwell on all the face of the earth…”

“God is not a straight, white republican man.” I happen to be one. Thankfully, my God is willing to forgive everyone regardless of their race or political beliefs. “For whoever calls on the name of the Lord shall be saved.” (Romans 10:13)

A Facebook friend found the “Vote Blue” meme posted on a page honoring Jimmy Carter. The 39th President of the United States professed faith in Jesus and even taught a Sunday school class. Ever since he left the White House four decades ago, the Democratic party has radically changed. Their increasingly socialistic policies go against what the founding fathers intended for this country. References to God have been removed from their party platform.

My faith compels me to vote red.

“I call heaven and earth as witnesses today against you, that I have set before you life and death, blessing and cursing; therefore choose life, that both you and your descendants may live” - Deuteronomy 30:19 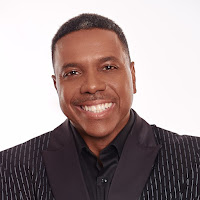