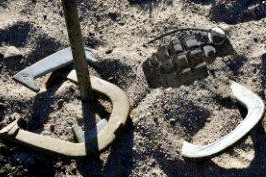 Last weekend I went to a gathering at a friend’s house. There we sat around a bonfire eating food and also played some games. One of them was bean bag toss. The object is to toss bean bags across the yard and into a hole. The game’s similarities to horseshoes reminded me of an old saying: “Close only counts in horseshoes and hand grenades.” A close loss is still a loss.

When it comes to receiving eternal life, close doesn’t count. Jesus told one man who answered a question wisely, “You are not far from the kingdom of God.” (Mark 12:34) Shortly after I became a Christian in 1991, my sister commented on how our parents were so close to being saved. They were raised in traditional churches but drifted into New Age beliefs. One can know a lot of spiritual truths without knowing “…the way and the truth and the life.” (John 14:6) Fortunately, I had the privilege of leading my mother to the Lord before she passed away.

Over the years I've ministered to numerous people who came close to praying with me to receive Jesus in their heart. Suddenly, they were distracted by a ringing cell phone or a friend who insisted on them leaving. Hopefully, other laborers have since led many of them to salvation. Regardless, we won’t see people who almost made it into heaven. One must be born again before they die to pass through the Pearly Gates. You are either in or lost for eternity.

“Repent, for the kingdom of heaven has come near.” - Matthew 3:2