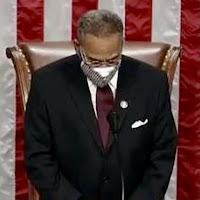 Last Sunday, a Methodist pastor turned politician said he was “honored” to deliver the opening prayer for the 117th Congress. Sadly, Emanuel Cleaver dishonored the true living God. While he did recite the Priestly Blessing in Numbers 6:24-26, Cleaver closed his prayer “…in the name of the monotheistic God, Brahma, and the god of many other faiths. Amen and A-woman.” Didn’t he learn in seminary “amen” has nothing to do with gender?

Amen is a word of Hebrew origin that means, “so be it” or “let it be.” It’s something many Christians say when they agree with what a preacher says. “Amen” is sung at the end of some traditional hymns. It’s also a word found at the end of every book in the New Testament except for Acts, James, and 3 John. Some ministers preach that “amen” is not the closing word in the Book of Acts because God wants His people to continue ministering like the early apostles.

I learned from a Christian software program of other significant uses of “amen.” In Deuteronomy 27:15-26, “amen” appears twelve times after each statement of a curse directed toward those who disobey God. Similarly, “amen” is used as a response after statements of promise (Jeremiah 11:5) or praise and thanksgiving (1 Chronicles 16:36), and as a conclusion to the first four of the five “books” of Psalms (Psalms 41:13; 72:19; 89:52; 106:48). The only exceptions in the Old Testament are two occurrences in Isaiah 65:16. The phrase “the God of amen” (or “the God of truth”) stresses that God is the one who is “firm”; that is, He is trustworthy and faithfully fulfills his promises.

The use of “amen” as a response to a preceding statement continues in the New Testament. It appears after doxologies (Ephesians 3:21), benedictions (Galatians 6:18), the giving of thanks (1 Corinthians 14:16), prophecy (Revelation 1:7), and statements of praise (Revelation 7:12).

One time I ministered to three boys playing near a school. After I led them all to the Lord, one of the boys asked if it was necessary to say “amen” at the end of every prayer. I told him I didn’t think so but advised him to always pray to the Father in Jesus’ name. I hope Emanuel Cleaver remembers that if he’s called to lead another congressional prayer. Praying to false gods violates the First Commandment: “Thou shalt have no other gods before Me.”