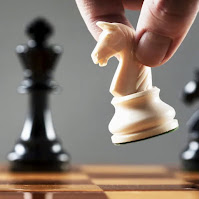 As a young Christian, I read many books by Kenneth E. Hagin and his son Kenneth Hagin, Jr. One of the latter was titled “It’s Your Move”, which compares our walk with the Lord to a chess game. When we make a move, then He makes a move. Dad Hagin often said, “It is easier to steer a car when it is moving than when it is parked.” I’ve seen this truth manifest many times during my missionary travels.

Back in 2003, I flew to Berlin, Germany. After staying in a prayer house for nearly three weeks, two women invited the caretaker and me to go on a road trip with them to Nuremberg. I was reluctant to step out until one of the women said she knew a hotel owner that would provide a room for two nights. Upon our arrival in Nuremberg, we attended a church service. The first worship song I heard was based on Romans 8:1-2. I had read those same verses out loud in the car moments before. I also heard a minister say, “God moves with those who move.” That assured me I did the right thing. The next night, I taught on evangelism at this church. God later opened doors for me to minister in other German cities.

Last month, I moved to San Antonio, Texas. A couple that had been missionaries themselves hosted me the first few nights. However, they questioned the way God was leading me. Without having other lodging possibilities, I rented a motel room to fast and pray. A breakthrough developed after I took a bus downtown one day to go for a prayer walk and evangelize. Across the street from The Alamo, I met a woman playing guitar and singing worship songs. While we fellowshipped, this woman told me about the church she attends. I felt led to go there the following Sunday. The pastor asked me to speak for a few minutes. After the service, his assistant offered me a place to stay.

Are you seeking divine direction? Abraham had a promised land set aside for him but didn’t find it until he left his home country. Unless He specifically tells you to wait on Him, the Lord is likely waiting for you to do something. Jesus is the “great Shepherd of the sheep” (Hebrews 13:21) and will let you know if you’re going the right way or need to adjust your steps, but not until you start moving.

“In the same way, faith by itself, if it is not accompanied by action, is dead.”