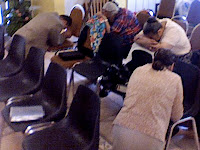 Let’s suppose you were a parent with five children. One of your sons came up and asked if you would take the family to the mall. You reply, “Sure. We’ll go there this afternoon.”

A minute later, your other son who overheard his brother asks if you would take the family to the mall. You reply, “I already told your brother I’d do that.”

Seconds later, one of your daughters who was within earshot of her brothers approached you and asked about going to the mall. What would your answer be? By this time you might be a little annoyed but if you were a good parent, you would still say “yes.”

Within the next couple of minutes, your two other daughters ask the very same thing. You reply in frustration, “Didn’t you kids believe me when I said ‘yes’ the first time?”

This scenario sounds ridiculous, but this is how many people approach God in prayer. There was one prayer group I briefly attended where this sort of thing happened all the time. After discussing our prayer requests, we each took turns uttering petitions before the Lord. The first person prayed for several of the requests. Then the next person did the same thing, repeating many of the requests the first person already prayed. Then the third person did likewise and then the fourth and so on.

Many people seem unconvinced God heard their prayers the first time. Some Christians cite the persistent widow in Luke 18 to justify their pestering God with the same need. Keep in mind the widow was dealing with an unjust judge.

On the other hand, the Lord wants to give us the desires of our heart (Psalm 37:4). Whenever we need something from God, the best thing to do is pray and then keep thanking Him until the answer manifests. Jesus said in Mark 11:24, “Therefore I say to you, whatever things you ask when you pray, believe that you receive them, and you will have them.”

Delays in answered prayer are not because God wasn’t listening. Sometimes they are due to demonic opposition. In Daniel chapter 10, the prophet had been fasting and praying for three weeks. Notice what the angel told Daniel beginning with verse 12…

12 “Do not fear, Daniel, for from the first day that you set your heart to understand, and to humble yourself before your God, your words were heard; and I have come because of your words.

13 But the prince of the kingdom of Persia withstood me twenty-one days; and behold, Michael, one of the chief princes, came to help me, for I had been left alone there with the kings of Persia.”

There are situations we must be persistent in intercession when it involves other people’s wills. Examples would include the government and a loved one’s salvation. For the latter, it’s better to pray for laborers to cross that family member’s path (Matthew 9:38) instead of habitually praying, “Lord, save So-and-So.” God wants your family members in the kingdom more than you do but needs His people to get the gospel to them.

In some prayer meetings I’ve been to, one person would verbally pray for all our needs. The rest of us would be in agreement. In other groups, each person would pray for another person’s request. That way, everybody took part in praying. All petitions got covered without being mentioned over and over.

Jesus warned us in Matthew 6:7-8 against making “vain repetitions as the heathen do. For they think that they will be heard for their many words. Therefore do not be like them.” So the next time you need something from God, avoid the temptation to keep asking for it again and again. Believe and then receive!

“But let him ask in faith, with no doubting, for he who doubts is like a wave of the sea driven and tossed by the wind.” - James 1:6