A Matter of Trust 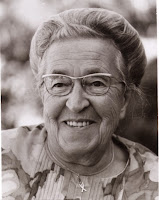 There’s a well-known story involving Dutch holocaust survivor Corrie ten Boom (pictured here) about the power of forgiveness. Shortly after being freed from a Nazi concentration camp, Corrie spoke about that experience at a church in Munich, Germany. A former camp guard that Corrie recognized approached her, extended his hand and asked for her forgiveness. Corrie struggled at first while she stood face-to-face with one of her former captors. Finally, Corrie shook the man’s hand and in her own words: “I had never known God’s love so intensely, as I did then.”

A few years ago, I experienced a forgiveness test at a revival meeting in the Minneapolis area. Around the time the preacher talked about forgiving others, I noticed a familiar-looking man leaning up against the wall. It turned out to be my former best friend whom I hadn’t seen in over a decade. “Stephen” betrayed me by getting into an adulterous relationship with my then-wife who separated from me and subsequently filed for divorce. Immediately, I reminded the Lord of my forgiving Stephen but had a feeling we would end up talking that night.

After responding to an altar call and doing some “carpet time”, I went to use the bathroom. Sure enough, Stephen was also in there. He asked to speak with me, and we moved out to the lobby. After a few minutes passed without him mentioning my ex-wife, I went ahead and told Stephen I had forgiven him for betraying me. He thanked me but didn’t apologize or say anything that sounded like genuine remorse. Stephen said something about contacting my ex-wife’s father again. He also wanted to stay in touch with me through the Internet. Although I later showed him my website on my laptop, I didn’t have peace about giving him my email address.

Sometimes boundaries need to be set when a professing Christian breach their trust. Even Jesus didn’t have blind faith in people. John 2:24 (NLT) says, “But Jesus didn’t trust them, because he knew human nature.” While we are to believe the best of every person (1 Corinthians 13:7), it’s unfortunate when a lifetime of trust gets broken in seconds.

MilanMom said…
I’m so sorry you went through such a terrible experience, brother, and even more so that it didn’t seem to be resolved. It’s good for you that you put yourself in the Lord Jesus’ hands and obey him. That is your salvation and vindication in this. God bless you. Thank you for encouraging the saints. I think that pleases the Lord. Have a glorious Christmas and New Year! It’s gonna be biblical!
November 28, 2020 at 9:17 AM