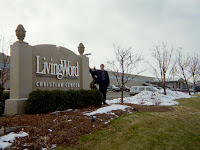 Forty years ago, a church was founded that would impact my life. A pilot named Mac Hammond and his wife Lynne had led a Bible study in the Minneapolis area. In November 1980, it officially became a church called Living Word Faith Fellowship that initially met in a hotel conference room. It later moved into a building in Brooklyn Park, merged with another church, and was renamed Living Word Christian Center. This congregation that started with just twelve people has grown into a body of more than 10,000 members.

I was introduced to Living Word in February 1991 through my then-girlfriend. She attended services there and invited me to go with her one Sunday morning. It reminded me of a service I might see on TV (later finding out the church just begun broadcasting on a local station). Pastor Mac encouraged first-time visitors to come back again “to take a more accurate measure of us as a church.” The next two times I went to Living Word, I still resisted the altar call for salvation. Coming from a traditional Lutheran background, I was a bit uncomfortable in a Full Gospel atmosphere.

Then on March 19 of that year, my sister and her husband led me to the Lord at their home in Fargo, North Dakota. Two days later, I met with a pastor from their church. He recommended visiting two fellowships he knew about in the Twin Cities area. One of them was The Rockatorium, the youth ministry at Living Word Christian Center. Soon I attended membership classes at Living Word and decided to make it my home church. That summer, I got water baptized during their annual picnic.

For the next two years, I put my audio recording skills to use by volunteering in Living Word’s tape ministry. Having access to the church’s cassette library helped me grow as a Christian. Romans 10:17 says, “So then faith comes by hearing, and hearing by the word of God.” I listened to numerous sermon tapes at home, at work, and in my car. In addition to Pastor Mac, I heard messages from associate pastors plus guest speakers such as Dwight Thompson, Willie George, Jerry Savelle, Jesse Duplantis, and Kenneth Copeland. Their teachings built my confidence in God’s promises of healing and prosperity as well as eternal life in heaven.

After a temporary move to the Chicago area, I returned to the Twin Cities in early 1994. By this time, my friend Steve had become a leader in Living Word’s evangelism ministry and invited me to go street witnessing with them on Monday nights. The Lord had already put it in my heart to share my faith more. My initial outings did not excite me. I felt awkward approaching total strangers with the gospel. Finally, I led one to the Lord and have been fulfilling the Great Commission ever since.

At the end of 1995, the Lord led me to become an usher. Back then, the ushers at Living Word wore suits and ties. That brought me outside my comfort zone since I prefer dressing casually. After doing that for twelve months, I stepped down to focus more on evangelism. Eventually, the Lord led me to leave Living Word and become a full-time missionary. For a while, I mostly traveled along the east coast of the United States.

In recent years, the Lord has led me to return to the Twin Cities area for extended stays. Although I’ve worked with other churches in the area, I still attended services at Living Word Christian Center and often joined them for evangelism outreaches. The church has changed since I first started going there. For example, the worship musicians were (in my opinion) a bit stuffy doing inspirational songs I mostly didn’t care for. Now they have a more modern sound with added visual effects. Living Word has expanded to include a Christian school, a chemical dependency treatment facility, and various other ministries.

Tonight the church is having a 40th birthday celebration. I’m thankful for Lynne Hammond’s commitment to prayer and Mac giving up his airfreight business to pastor a church that has changed many lives. Until the Lord returns, I pray Living Word Christian Center continues having a positive influence upon the state of Minnesota and beyond.

“…and on this rock I will build My church, and the gates of Hades shall not prevail against it.” - Matthew 16:18