The Government is Not God 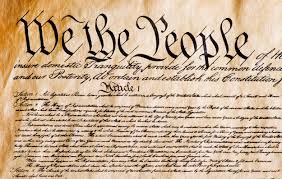 As a boy, I watched a lot of television. Some programs had an educational value such as the “Schoolhouse Rock” cartoons that used to air on Saturday mornings. Those clips taught subjects such as multiplication, grammar, and American history. One of the latter was about the Constitution and sang the intro of this important document…

“We the People…in Order to form a more perfect Union, establish Justice, insure domestic Tranquility, provide for the common defence, promote the general Welfare, and secure the Blessings of Liberty to ourselves and our Posterity, do ordain and establish this Constitution for the United States of America.”

Although I didn’t do well in my seventh-grade history class, I got a decent grade on one test when we had to write out the Preamble. Music can be a helpful tool for memorizing things.

I’m thankful to be an American but have been appalled by recent actions taken by some political leaders. Under the guise of “saving lives” from the coronavirus, a few authority figures have enacted ridiculous orders…

Fortunately, not every politician is seeking to control the populace. Last year, Ron DeSantis became Florida’s newest governor. He stated in his inaugural address: “Our rights are endowed by God, not government.”

God has ordained positions of authority. The purpose of which is for them to serve and protect the people they represent. It’s not for people to serve the government and look to them as their source. Before communism overtook his country, Russian playwright Anton Chekhov stated, “The government is not God. It does not have the right to take away that which it can't return even if it wants to.”

Back in 1863, President Abraham Lincoln pointed out in his Gettysburg Address that government is “…of the people, by the people, for the people.” The United States is supposed to be the land of the free. Our Founding Fathers encouraged us to resist those who seek to take away our liberties. Therefore, it’s time for more Americans (and those locked down in other nations) to take a stand against corrupt politicians. Moses didn’t just pray for Pharaoh. He appeared before the Egyptian monarch and declared, “Let my people go!”

“It is an abomination for kings to commit wickedness, for a throne is established by righteousness.” - Proverbs 16:12